The making of a clown...

I'm working on my figurative jars, or Jarheads, as I like to call them. I'm keeping track of the time it takes me to create one and I think I'll have to sell them for an arm and a leg. or at the very least the first born child. That is if I plan to get paid for my time. But...I love making them and I'll worry about price later (I have a week if I'm going to put any in this sale on the 26th.) I did have a few interruptions this afternoon...picking up my mom...making out some bills for my hubby...eating lunch which also interrupts my train of thought. I don't know about you, but when I'm busy working on something, I often forget to eat! 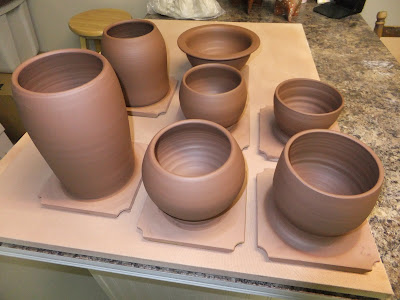 They don't look like much here, but I throw some basic shapes, trying to match a "head" to a "body". I've tried hand building...and sometimes I do a little, but the perfectionist in me prefers a thrown form. 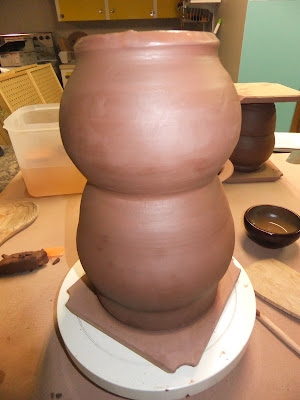 I've puffed out the belly a little and attached the head. 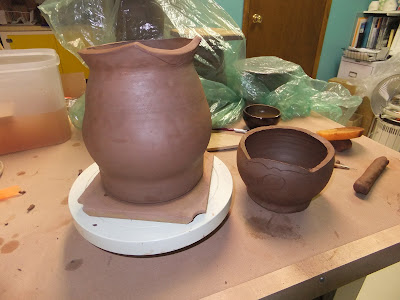 Sliced off the head...at the mouth. I'll add a flange inside the head so the lid stays put and course I'll paint that as teeth! 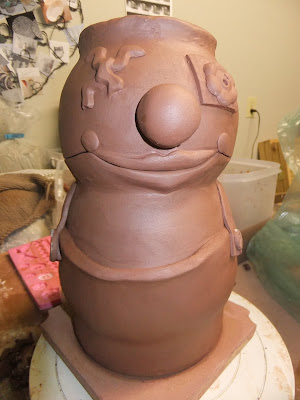 Head fits! Now the fun part, adding character! The lips aren't quite what I hoped for but I think they'll work. 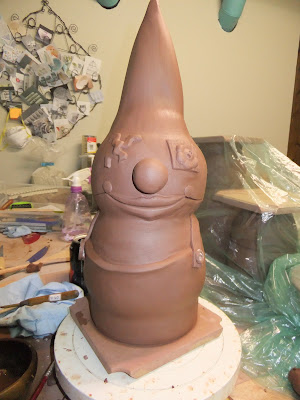 Cone hat! Arrggh!! Had trouble with that! You'll notice my workspace gets very messy. I create in the same way I cook...is there ever enough counter space? 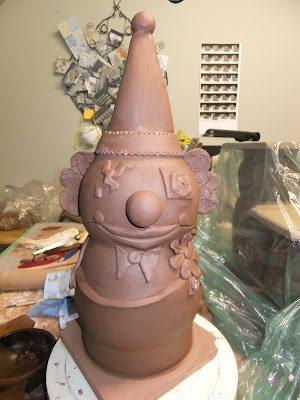 Ta da! Finished...or not. I'm thinking maybe some big shoes and of course I'll have to u/g bits here and there, incise some lines...perhaps a stamp or two. I'll paint some striped pants I think, polka dots on his top and maybe the hat and he'll need a big red nose! Then it's a bisque fire and a wash with a black underglaze to fill in all those grooves. But for now I'll wrap him up nice and snug in a plastic bag so all those added bit and pieces stay put!

So there you have it! More pics to come!