BIG is the best!

I'm pathetic at posting these days. I'm blaming it on my company and as of yesterday, they've all gone home and I'm feeling much more inspired to play with my clay. That might be because I've come to realize that I need to get busy if I'm to have a nice variety of work for these upcoming sales or it might be because I have finally taught myself to spiral wedge and can now officially say goodbye to those nasty air bubbles that have been tormenting me!

So..spiral wedging... It definitely takes some practice...and STRENGTH! I found standing on my little blue stool was much easier because the how-tos I've read have suggested straight arms and I'm short, with a bench that is a little high for wedging period, let alone spiral wedging. I also find that it goes much better if I don't watch my hands....just get into a rhythm. I am a far cry from doing it well...nothing like the videos I've watched on You Tube, but I'm sure I'll improve! Yesterday I wedged the same 3 balls over and over and over again...and then cut them up to see if there were any air bubbles and nope...nothing that I could see! I'm not convinced that my rams head wedging was the reason for the bubbles prior to this. I think it was my centering to be honest. I think I was pushing too hard and getting air trapped under the clay. Now that I am aware of it, I'm trying some different techniques, and when I do get air trapped and I haven't coned it up and dispersed it into a bubbly mess, I seem to have figured out how to get rid of it! So far it's working!

So....I managed to wedge 8 pounds of clay! That's the most I've ever tackled! Not only did I wedge it but I threw a bowl...a VERY big bowl! The bottom is a little too thick but that I can trim and I wish that I had left the top a little thicker so that I could have left a bit of a rim, but honestly...it turned out so well...and even when it looked pretty perfect to me, I kept on tweaking and had to make myself put down my rib and STOP, before I spoiled the whole thing. I've done that before...in fact 3 times yesterday on some very nice big bowls!

My BIG bowl (now to decide on decorating!) 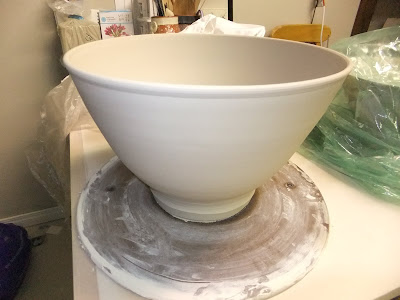 I also broke into my box of precious...OH SO PRECIOUS, Laguna Frost that I bought ages ago in anticipation of one day working with a porcelain. I'm not sure I'm ready to throw it. I was surprised by the texture to be honest. But I did roll out a smallish slab and cut it into little shapes, which then became pendants (or so I'm hoping), and one thing lead to another and I was decorating them with a variety of leafy patterns! Pretty happy with them, even though I really don't know what to expect once they dry. Will they warp? Curl up? I've noticed that a few already have...which I don't mind so much. I'm not sure what to expect once they're fired either, so it's all a bit of an experiment for me. I'm not planning to glaze them, so I think I can fire them at Cone 5 and skip the bisque firing? Hmmm....I'll have ask to be sure.

Any suggestions on what to use these for would be greatly appreciated. I'm thinking they'd be pretty nice as a necklace but I'm wondering what to hang them from? Leather cording perhaps? Will they be heavy enough? 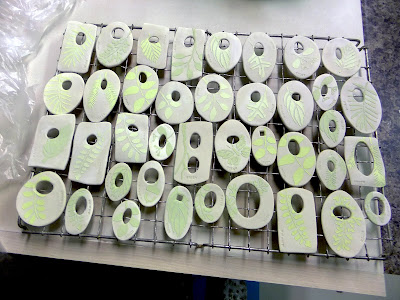 Anyway, here I am blabbering away and making this post far longer than I suppose anyone is going to want to read. I really should break these down into several smaller posts...yes...that's what I'll do....next time!

Here's a couple of other things I've been doing. The first is a flower pot I made in trade for the cutest stuffed animal. (pictured below). Erin Weiss of Boolah Baguette is so talented! You can find her here on her etsy site! 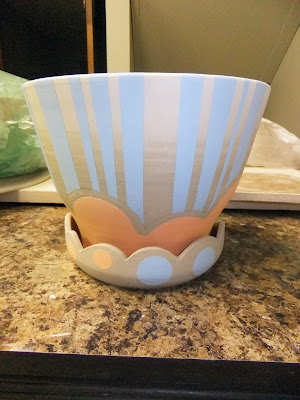 Bella (she loves swimming so you'll get the cute little ruffled swimsuit and life jacket!) 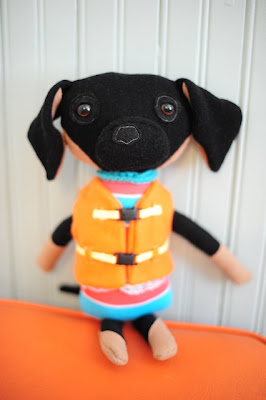 I also played with a couple of bowls, using the same stencils as I did for the pendants. They're pretty...but pretty simple as well. Not sure what I think of them yet. 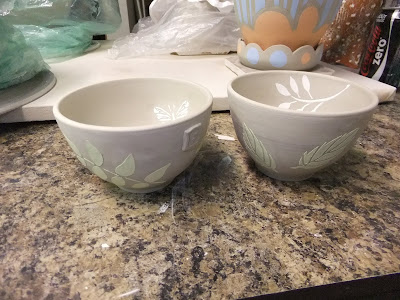 I'm about to pop over to Mud Colony to see what my other pottery friends have been up to! You can check them out too...here!