Snow, snow and more snow! I know it's all going to disappear eventually...but when! Another foot of snow fell on the weekend. Our roads are blocked. We've broken our snowfall record from the winter of 1955-56! Over 196.1 cm...that's over 6 1/2 feet!
I can believe it. I can't remember this much snow. I can't remember highways been closed as often as they have been this year or roads blocked so that I'm stuck here in my house! On Friday I watched our resident deer walk across the front lawn in hopes of finding a branch to nibble in the bluff. The belly of one of the bigger deer was dragging in the snow. Needless to say, it was slow going, but the poor things are so hungry. There's no food to be found. The snow is too deep and they can't dig deep enough to find any grass or leaves or whatever it is deer eat and quite honestly they've stripped the bottoms of most of the trees in our yard and we have a LOT of trees (thousands...seriously...farm yard....shelterbelt...I can vouch for 2000+ because we planted them!) 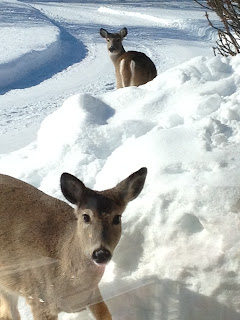 I felt so bad for them that I chopped up the celery and carrots that I had in my refrigerator, along with some apples and poured out the bag of bird seed. Then it snowed...and it was all buried and hidden from them, but today I see there are tracks...LOTS of tracks, right in the area where I heaped it all, and the snow has been pawed away. Sadly it wasn't much and I didn't see them eating it, so not sure how many were there. What I do know is there were a lot of tracks and we've seen as many as 16 at a time. So not likely it was enough to fill any bellies but at least it was something. I talked to our nearest neighbour on the phone today and he was telling me he feeds them everything....all his leftovers....including potato salad and they're gobbling it up! Who knew? I guess when you're hungry, you'll eat anything.

If I can say one good thing about all this snow and being trapped in my house, it's that boredom finally set in and I had to find something to keep myself busy. So, it's back to potting! I've had 3 really productive days and feeling really inspired. I have some new work. Retro inspired. I spent all of today decorating some really cute tumblers and I have a great pitcher that I will decorate tomorrow, after I figure out how to trim the bottom because I can't set it on it's spout. I do have a new Giffin Grip and might try to hold it up with those arms it comes with, though they scare me a little. I can't possibly tip the pitcher and hold it mid air while I'm squeezing it between those arms, so I'll have to get my hubby to help. I hope I don't ruin it. I love the shape and I can picture it finished. I have no idea if it'll be a good pitcher, but I really like making them. In fact, there are plans for another very soon!

I'll post pics of my stuff tomorrow!
Posted by Brenda at 12:50 AM